In many industries, such as retail, a uniformed member of staff could be the very first direct interaction your prospective customers have with your brand. Making sure it’s presented in the right way and most importantly memorable, will be a step in securing your prospective client as a brand fanatic.

So, why do customers respond to a branded uniform over any other representation? It’s the familiarity. A good interaction with a friendly member of staff will be attributed to the logo on your shirt. This is down to basic human nature, we crave the ability to humanise every kind of entity we encounter. Therefore, having a branded uniform on a real-life person adds a human touch to your organisation, enabling your customers to feel like they are building a relationship with a local personality that cares about them, as opposed to a faceless corporation.

The benefits of a branded uniform aren’t just outward, they have an equally positive inward effect on your team, increasing cohesiveness and morale and letting them buy into your brand message. Without delving too far into psychology again, uniform applies to another quirk of human nature, the need for inclusivity.

Evolution has had numerous influences on our subconscious and natural psyche, one element of this is seeing a group as an opportunity to bolster our own chances of survival. While this no longer holds true in many parts of the world, it still explains why certain aspects of marketing and branding have such a recognisable effect on us; such as a branded uniform.

Inside a business, a branded uniform creates unity amongst staff members, they are no longer 100 individual employees; with everyone flying the same colours and logos they become a singular unit, a work force. It helps your staff to feel that their goals are aligned and that they are being bought into the wider business, they have something in common with their counterpart in a branch 400 miles across the country.

Recently we produced t shirts for a local athlete, Stacey Sloan – pictured below with Marc Desmond.

Stacey is a professional Brazilian Jiu-Jitsu competitor and fights out of Team Torres in Northern Ireland here in Derry.

Stacey came to us with the request of sponsoring her by supplying a number of t shirts for her to wear at her next event which was the European IBJJF Jiu-Jjitsu Championship in Lisbon, Portugal. We were more than happy to support Stacey and supplied her with technical t shirts which were branded with dye sublimation designs and featured the logos of her sponsors.

Stacey went on to win Gold in a fantastic bout, winning by a formidable submission against her opponent.

We would like to say Well Done to Stacey and many congratulations on all your hard work and training, it has all paid off. Next stop the World Championships!

If there is one corner of the market that has huge potential, it is the Fitness market.

At Partridge we have supplied clothing, merchandise and much more to many gyms and fitness centres, both local and further afield.

If you own a gym then you need branded merchandise and at Partridge Peartree we can supply you with everything you need to promote your business.

Fitness wear make up a huge percentage of the merchandise purchased by members. Hoodies, t shirts, leggings, towels, bags, caps, beanies, sweatshirts, vests…  the list is endless! We have a wide range of garments available, both for men and women. You will be surprised at how many people will want to buy clothing branded with your logo.

This is also a great way to increase your brand awareness and what better way to avail of it than having your very own members promoting your business and brand.

At Partridge we can offer screen print and embroidery in house. Both standard branding processes with excellent results. Recently we have been starting to get involved with dye sublimation, a process of full colour branding on polyester garments with gives a fantastic result.

Another part of the merchandise on offer is drinkware. Water bottles, thermal mugs, ceramic mugs, protein shakers. Again, the amount of products on offer is huge and the branding areas on these products is substantial, giving your brand plenty of room to be seen.

Power banks, either wired or wireless. They are the newest product and new improved models released steadily with larger capacity and faster charging times. As many people now basically live their lives through their phone, you can supply them with a high end powerbank that will charge their phone or device while they are at the gym or on the move. Coupled with your logo this will ensure that your brand get full exposure.

Contact Marc at Partridge Peartree to discuss all the options and ideas for promoting your brand.

Effective choices are based on clear objectives

What, exactly, do you want your promotional products to achieve? Obviously, you want to increase your company’s visibility but to what end and, in particular, for how long? For example, if you are launching a new product and want to get the word out on the street quickly to generate interest which you hope will feed into your sales funnel, then you probably want to look at a low-cost, high-visibility product your customer will “use and lose”.

Confectionery is probably the best choice here and you can keep costs down by using packaging intended for immediate recycling. This can still look very attractive and can be used to hold key details, such as your website. If, on the other hand, you’re looking to keep your company in the mind of important contacts over the longer term, then you need to find something they will either use regularly or will enjoy looking at over the long term (the ideal would be both). If you have the budget, you could go for useful items such as premium office accessories.

If, however, you want to keep costs down, then the number one option is generally confectionery in a reusable container. This can also be a diplomatic option since it means that the confectionery part of the gift can be shared with other staff, if the recipient wishes, while they keep the container for storage.

Remember your recipient is a person, not a billboard

Be very careful with the likes of promotional clothing and bulkier bags. You may like the idea of having your company logo carried about everywhere the recipient goes but they might not agree and might prefer to keep the item for occasions when it won’t be seen or just stick it in a drawer and forget about it. Folding bags can be a reasonable option since they are light, easy to carry and very practical since many people now wish to avoid using plastic bags. If you go down this route, however, you will generally want to ensure you use a decent quality cotton tote or something similar rather than a plastic drawstring back as the latter tend to be quite flimsy and therefore not really suitable for shopping.

Recently we produced tees for Nancys Barn, Ballyliffin.  The staff and chefs received a letter of invite to the World Seafood Chowder Cook Off on Sunday 30th September in the famous Jersey Shore, Long Beach Island, New Jersey.

The restaurant is famous in Ballyliffin for its Seafood Chowder and has won many prestigious awards and accolades for its tasty treat!

This year Nancys Barn won 4 awards at the World Seafood Chowder Cook Off.

1ST PLACE ROOKIE OF THE YEAR

1st Ever International Competitor to Participate in the Famous Great Chowder Cookoff.

Recently Partridge Peartree produced screen printed t shirts for a local running club for a ‘Couch to 5K’ event. Many of which were celebrating on completing their first 5K. We were happy to support them and feel proud to have played a small part in their success!

The run marked a hugely successful end to the initiative which saw participants cross the finish line after an 11-week training programme.

It was a fantastic event which was very well supported by the runners, their families and the wider community.

The Fun Run had a total of 175 entrees on the day from first time event runners to elite runners, all supporting each other to complete their personal goals.

The ‘Couch to 5K’ programme is open to anyone and is aimed at complete beginners with expert coaching on hand to guide participants through to the end goal of completing a 5K run.

What’s your story, how did you get to Partridge?

I graduated from University in the summer of 2005 with a degree in Design.  The post of graphic designer became available and I went for the interview, albeit, not my best performance but I got the job. 12 years later and I am still part of the Partridge family@

What is your role?

My role is that of Lead Designer. I am in charge of the busy design dept and manage all the web based profiles and social media updates and blog posts. It is a very busy job but I love it.

What is your favourite Partridge product?

I have to say that I love the Power Banks and Bluetooth Speakers. Anything that connects to my phone while on the move is great.

What do you like to do outside of work?

I like to run when I get the chance. So far I have completed 2 half marathons. I hope to do another one.

We all love a good trophy.  Again, this year we have produced and supplied the clear glass awards for a very successful local film festival – Disappear Here Film Festival Ballyliffin. There were 10 awards in total. Very stylish clear glass wards with 2 spot colour print. Each award was personalised with the award categories.

Each year the County Donegal festival showcases all the best in local talent and also includes filmmakers and actors from Spain, Italy and beyond.

Below is a full rundown of all the awards on the night. We have also included some photos from the night.

The awards draw in a great following and also include many great film screening and Q&As with panels of filmmakers, their cast and crew on all the different aspects of making films in Ireland. 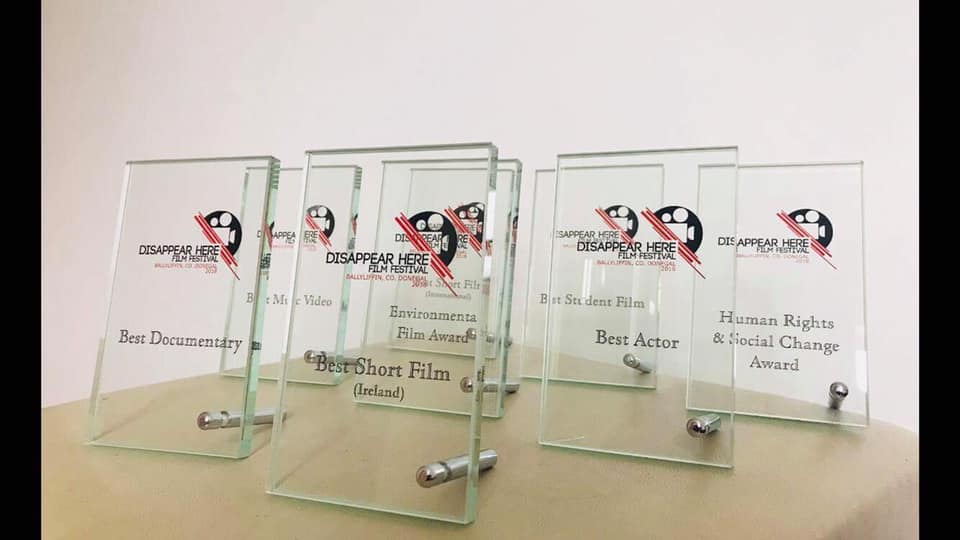 Congratulations to Jodi Desmond and the Northern Ireland cadet and junior fencing teams, who took part and  qualified for the Junior Commonwealth Games held in Newcastle in July 2018.

Jodi who was sponsored by Partridge Peartree was taking part in only her second tournament and made a very good account of herself and managed to secure the most points for Northern Ireland in the team event.

The experience gained at the games will prove invaluable to Jodi, and hopefully we will hear more from her fencing exploits in the near future.